Pubic apophysitis is a stress reaction at the secondary growth centre of the developing pubic bone, a common source of groin pain in athletes of adolescent or young adult age.

Pubic apophysitis can occur at any age prior to closure of the related apophyseal growth plate, typically affecting athletes between the ages of 14 and 26 years. Most cases present with exercise-related groin pain that is gradual in onset and centred over the pubic body with or without adductor radiation. An increase in adductor load often precedes the onset of symptoms, with the reported triggers in football including repetitive shooting exercises (especially long cross-over type kicking), forced hip abduction when tackling, an increase in training load, or a change in ball size & weight. Pain typically localises to the proximal adductor longus insertion and is provoked by shooting, passing, running, and ‘cutting’ (a rapid change in direction when running). Less commonly, the athlete who suffers a sudden apophyseal separation or avulsion may present with acute or acute-on-chronic symptoms. Additionally, pubic apophysitis may manifest as one component of the much larger clinical entity of pubic mechanical dysfunction or instability, and in this setting the overall picture may be much more complex with a correspondingly wider distribution of reported pain.

Positive physical findings include (a) tenderness over the symphysis pubis and adductor longus origin that does not extend to the proximal adductor myo-tendinous junction; (b) pain elicited to adductor stretch; and (c) a positive adductor ‘squeeze’ test in 70% cases. Adductor tightness is typically present, with pain elicited to stretch at a mean of 50° hip abduction. Resisted adduction will elicit pain at the proximal adductor longus insertion, greatest in the outer range of motion. A small percentage of patients also describe pain at the pubic symphysis on the FADIR test (hip Flexion, ADduction and Internal Rotation).

The pubic bone may be the last component of the human skeleton to complete its development, with the secondary centre(s) of ossification appearing at puberty and the physis closing variably in the 3rd decade of life (anywhere between the ages of 21 and 30 years in males). Following physeal closure, the pubic bone continues to remodel and may only achieve fully mature form at around 45 years of age. The pubic apophysis extends along the anteromedial corner of each pubic bone and contributes to the anterior ‘facet’ of the pubic bone in skeletally immature subjects (Fig 1). The medial margin of the physeal plate is intra-articular, producing a slightly undulating and ill-defined symphyseal articular cortex with an accompanying subtle ‘ridge and furrow’ pattern of peri-articular lucency on xray (Fig 2). The normal physeal plate shows predominantly uniform thickness, uniform MR signal and left-right symmetry (Figs 2 & 4). Chronic pubic stress arising from sport may delay the age of physeal plate closure. Occasionally, persistent non-closure occurs with a separate ossicle then remaining visible on X-ray in later adult life (usually at the inferior corner of the symphysis, perhaps a consequence of previous avulsion in many cases). The mineralisation pattern of the secondary centres of ossification at the pubis is highly variable and best appreciated on CT scanning. The ossific centres may be asymmetric in size and can vary greatly in both shape and number (Fig 3). In a sample of 31 normal male subjects (age range 9-30 years) who underwent pelvic CT for unrelated reasons, the earliest age of complete apophyseal plate closure was 21 years and the latest age of incomplete apophyseal plate closure was 26 years [1].

Fig 1. Normal pubic apophysis. MRI of a normal 15 year old female subject shows the location of the pubic apophysis at the anteromedial corner of each pubic bone. The apophyses in this example are indicated by arrowheads on axial PD-weighted MR image (A) and by a purple colour on the corresponding translucent 3D model (B). In order to show the spatial relationship of the pubic apophyses to adjacent structures, the 3D model has also been rendered with (i) the primary pubic ossification centres as gold, and (ii) the various para-symphyseal tendons as ‘crystal’.

Fig 2. Normal pubic apophysis. Fat-suppressed PD-weighted MR images (A) and corresponding plain X-ray appearance (B) of the normal pubic apophysis in a 13 year old female subject. The normal “ridge” (solid arrow) and “furrow” (dashed arrow) contour of the metaphyseal-side cortex produces a subtle horizontally-orientated pattern of striated lucency in the body of the pubis on X-ray. Note the medial extension of the growth plate to abutt the articular disc at the central symphyseal joint line, resulting in indistinct and often slightly undulating articular cortical margins at the symphysis pubis on plain X-ray. Arrowheads indicate the thickness of unossified apophyseal cartilage.

Fig 3. Normal secondary centres of pubic ossification. Coronal (A), axial (B) and volume-rendered (C) images from a CT scan of a normal 23 year old female subject show bilaterally open pubic apophyses. Note the process of ossification begins centrally within the apophyseal cartilage, is variable in pattern and may be asymmetric, and can be either unifocal or multifocal. On CT, physeal plate widening is consequently best assessed on axial images.

In the apophyses of skeletally immature subjects, repetitive mechanical stress is thought to compromise the blood supply along the metaphyseal side of the physis, preventing the provisional zone of calcification from laying down and thereby interrupting the usual mechanism of chrondrocyte apoptosis. This results in a widened physeal plate that is more susceptible to separation or avulsion. Physeal plate widening can be uniform, focal or mixed in pattern. Sequelae of apophysitis include (i) chronic pain of associated insertional tendinopathy, and (ii) apophyseal avulsions with or without subsequent chronic non-union. At the ischium (Fig 5), Martin & Pipkin in 1957 [2] identified 3 stages of stress-related apophyseal injury: (1) Irregular widening of the physeal plate with ill-defined demineralised metaphyseal margins described as ‘apophysiolysis’; (2) Avulsion; and (3) Chronic non-union. The same pattern of complication may be proposed for pubic apophysitis, where there is potential for chronic stress to produce delayed apophyseal closure or persistent non-closure (either partial or complete), chronic pain secondary to adductor longus origin tendinopathy, and apophyseal separations or avulsions.

Standard pelvis & hip radiographs may show (i) an irregular and/or ill-defined symphyseal articular cortex, and (ii) subarticular lucency at the symphysis with or without an element of associated ill-defined sclerosis (Figs 6-8). When florid, these changes produce the classical radiographic appearance of “osteitis pubis” (Fig 7). Ultrasound demonstrates (i) widening of the physeal plate (Fig 9), and often also (ii) exaggerated cortical irregularity along the metaphyseal side of the physis. As the stresses responsible for apophysitis are at least in part mediated by the adductor longus attachment, it is not surprising that a majority of cases show concomitant features of adductor longus origin tendinopathy on both ultrasound & MRI. In symptomatic cases, direct probing with the ultrasound transducer (‘sonopalpation’) may elicit tenderness over the affected physis and also, by default, the overlying adductor longus origin. The distribution of tenderness tends to be more pronounced medially than laterally, i.e. directly over the apophysis at peri-articular aspect of the pubic bone. MRI is the best imaging modality to demonstrate the entire pubic apophysis and any associated bone marrow changes. The cardinal MRI findings involve the physeal plate, which widens and becomes hyperintense. The pattern of widening may be diffuse, irregular or more focal, with ‘cyst-like’ expansions often present (Fig 8). When active physeal stress is present, pubic marrow oedema will be seen along the metaphyseal side. Superimposed thin but distinct echogenic lines that extend along the physeal plate on ultrasound, or similarly thin hyperintense lines of fluid signal that extend along the physeal plate on MRI, indicate apophyseal separations that are often non-displaced and may be partial or incomplete (Figs 8 & 9). For reasons of both radiation exposure and relatively poor soft tissue assessment, CT is not often performed, but may show an open physis with widened growth plate or an avulsion fragment with or without periosteal reaction at the fracture margin (Fig 10). 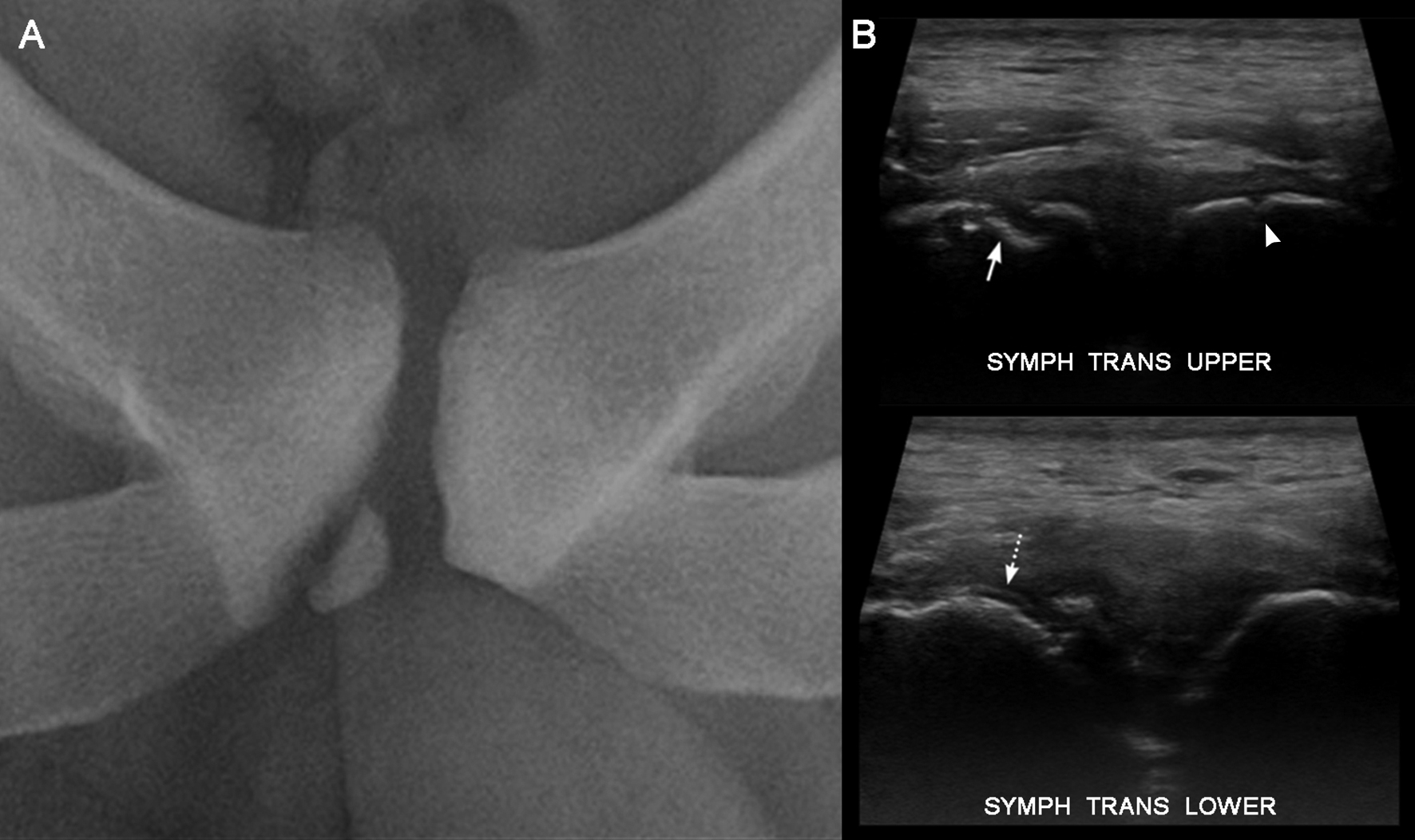 Similar to experience with stress-related apophyseal changes elsewhere in the body, it is important to understand that low-grade stress reactions at the pubic apophysis are common and may be asymptomatic. To make things even more challenging at the clinical level, not only is pubic apophysitis difficult to distinguish from adductor longus origin tendinopathy, it frequently co-exists with this condition. Pubic apophysitis is therefore a combined “clinico-radiologic” diagnosis that, at a minimum, requires: (a) an appropriate clinical setting and physical examination findings; and (b) imaging findings of either active stress-related change at the pubic apophysis or recent apophyseal avulsion.

The treatment of pubic apophysitis is conservative. Mechanical loading of adductor longus should be greatly decreased to reduce stress and allow normal physeal development to resume. This clinical entity responds well to initial rest followed by careful progressive rehabilitation guided by pain. It should be recognised that adolescent and young adult male footballers are skeletally immature and therefore vulnerable to pubic apophysitis if exposed to heavy training loads. Football trainers should carefully monitor for any prodromal symptoms of adductor-related stress and on this basis individually tailor training loads.

The author thanks his colleagues Matthieu Sailly (Sports Physician), Rod Whiteley (Physiotherapist), Bruno Giuffre (Radiologist), Amanda Johnson (Physiotherapist) and Per Holmich (Orthopaedic Surgeon) for their work in understanding this condition.

Co-author of Atlas of Imaging in Sports Medicine